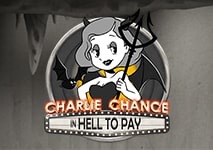 If you are a fan of devilish fun and games, you are going to love Charlie Chance: in Hell to Pay. It sports dynamic illustrations and throwback 3D graphics. The game is a throwback to the 40s as it is an innovative remake of the 1940s-themed Hollywood classic movie.

Players that choose to give this one a spin will have the luxury of indulging in tons of rewarding features ready to boost wins to the max. It is a medium volatility game that offers up to 6,666x the initial wager. With an attractive RTP of 96.23%, which is over average, it is pretty hard to pass up on trying out this one.

The grid has a 3×3 layout with 5 fixed paylines. You can place bets from as little as $0.10 and as much as $100, allowing for both casual and professional players to enjoy the fruits of this fun slot. You will also notice that it has put an interesting twist on the classical symbols, having turned the lucky 7s into a 666 icon. 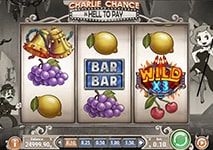 Charlie Chance: in Hell to Pay is a unique slot, which is loosely based on fictional detective “Charlie Chan”. This character can be traced back for nearly a century in various TV shows, literatures, and movies and was quite popular a few decades ago.

The setting is in Hades on the River Styx, and the background is in black and white, as are the characters around the grid. However, the grid itself brings a bit of pale color to the scene, as do the symbols that will appear on the reels. You will encounter many classical slot icons such as bells, bars, and fruits. During gameplay, players may enjoy the sight of dancing demon shadows in the background to the playful music in the background.

Other than those, players will also run into other rewarding icons. One of those is the Wild, which is easy to recognize, courtesy of the word WILD printed in the middle. This symbol may stand in for all others apart from the Scatters. Some Wilds hold 2x or 3x multipliers as well.

The Scatter symbol is not an individual one that takes its own place on the reels. Rather, it sticks on to other icons randomly on the grid. It is depicted as the face of Charlie Chance’s sidekick. Landing 3 symbols with a Scatter on them will trigger the feature board. 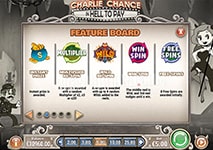 Charlie Chance: in Hell to Pay has 3 symbol rows and 3 reels, so winning combinations are formed in 3s only. There are 5 paylines on which to land the icons, and wins pay from left to right.

Lemons and cherries will bring players 0.4x the stake for landing 3 matching icons on a payline, while the apples and grapes will award 0.8x the initial bet. Landing 3 Bar symbols on a bet way will result in a payout of 2 times the wager, while the devil’s number, 666, will bring you a win of 3x the bet.

The highest-paying of these symbols is the two bells. This one will award 4x the stake for landing 3 of a kind on a payline. However, it is not the most-rewarding icon of them all. The Wild also forms a winning combination in this slot. Landing 3 of them on a bet way will get you a reward of 8x the bet. Players have a maximum potential win of 6,666x the stake when you throw in all the bonus features.

When you get to the feature board, Charlie Chance will trudge along a line of different possible attributes. He will stop randomly on one of them, thus deeming the bonus you will receive. You will activate one of 5 possibilities – Instant Prize, Multiplier Re-Spin, Wild Re-Spin, Win Spin, or Free Spins.

The Instant prize will award players 10x the bet straight up. If you landed the Multiplier Re-Spin, you will be granted one free re-spin with a randomly selected multiplier of 2x, 3x, or 25x. A Wild Re-Spin also awards a free re-spin, but with up to 9 Wilds placed randomly on the reels. The Win Spin will turn the middle reel wild while the 3rd reel nudges until a guaranteed win appears. Finally, the Free Spins will unlock an initial 8 bonus rounds. These will be played at the same bet that triggered the feature.

Charlie Chance: in Hell to Pay is a real catch. This innovative twist on that classic theme really is intriguing. Not only that, this slot is absolutely packed full of exciting bonuses that bring extra rewards.