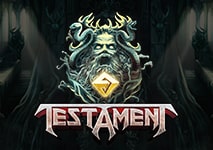 Play’n GO has been at it again and has now brought us yet another exciting new slot, Testament. This one is based on a popular metal band that has been banging out new albums since the 80s. Testament slot has an epic thrash metal soundtrack to entertain players during gameplay. Not only that but you will have awesome 3D symbols jumping out at you when you land a winning combination.

The game has a decent betting range, allowing for wagers from as little as $0.10 to as much as $100. Testament has a great maximum payout limit, set at 20,000x the stake. Throw in the rewarding RTP of 96.40% into the mix, and you have yourself a worthwhile slot on your hands. There are also no fixed paylines, but 243 ways to land a winning combination. 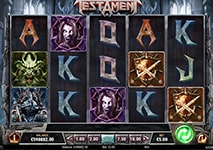 Testament is based on an 80s thrash metal band, and more specifically, their album Dark Roots of Earth. As such, there are many darker aspects of the setting of the game. When you enter the slot, you will be taken to a massive, expansive hallway in a huge gothic building. It even seems as though the building grows intertwined with an ancient tree that forms the central post of it.

The board consists of 5 black reels. On them, many gothic and typical for the genre symbols land, ready to grant players with rewarding payouts. Some of them are skulls, mythical creatures such as vampires, werewolves, and skeletons. Playing in the background are several pieces from the aforementioned album to help set the theme.

There are 9 standard symbols that offer various payouts. The low-paying ones are 4 playing card face values – J, Q, K, and A. You will also encounter the remaining high-paying icons that are the more attractive of the bunch. Players can happen upon the shield and two swords, the blue skeleton upon a throne, the green werewolf, the purple vampire, and the red skull.

You will also encounter a few other icons while spinning these hardcore reels. One of those is the man with a yellow hat with twisted horns like a ram. This symbol is the Wild that can substitute all others except the Scatter. The Scatter is an elderly man with snakes in his hair. He will grant free spins or trigger the song feature. 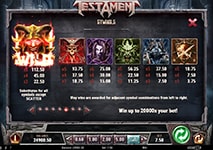 If you see a J or Q appear on the reels in a combination of 5 identical icons, you will receive 0.5x the stake. The K and the A will bring players 1x the initial bet if they succeed in landing 5 of a kind on bet way.

The swords and shield award 2.5x the stake for a winning combination of 5. If you see the skeleton appear in a row of 5, you will win 5x the bet. Players that manage to land 5 werewolves on the screen will win 7.5x the initial wager, while the vampire offers 10x the stake. Finally, the most rewarding of the lot, the red skull awards 12.5x the bet for 5 on a payline.

Another interesting function of the red skull is that it may randomly turn wild at any given time of the game. If the free spins are activated, it is guaranteed to become wild. Wild symbols may stand in for others on the grid. This allows it to create and improve winning combinations on the reels to increase players’ payouts. Other than that, Wilds carry their own value and may form their own winning combinations. A line of 5 Wilds awards 15x the bet, giving it the highest value in the game.

Scatter symbols have quite a few interesting features. One of those is that it forms its own winning combination. Landing 5 in any position awards a payout of 20,000x the wager.The Scatter starts giving at just two matching icons. If you see 2 appear on the reels, you will activate the Song Feature which consists of 3 possibilities. In all of them, 3 free spins will be granted during which all skull icons will turn Wild. In Dark Roots Of Earth, they are contagious, spreading upwards or downwards. During Throne of Thorns, the reels will expand to form a board with 4-5-6-5-4 symbol rows. If you got the 3rd option, Cold Embrace, all Wild symbols “freeze” in place.

Rise Up spins will be triggered if a player lands 3 Scatters on the grid. Players will receive 9 free spins, during which, all red skulls become wild. The ways to win rocket up to 2,400 when the reels expand to 4-5-6-5-4. During Rise Up spins, Scatters destroy symbol blockers on the corresponding reel. If you manage to destroy all of them, you will unlock Testament Spins.

Triggering Testament Spins will award 3 bonus rounds in which all skull icons turn wild. Wild symbols may spread up or down and are sticky. There are 2,400 ways to win when the feature is activated.

Landing 4 Scatters on the screen will give players 5x the stake as a reward and awards Rise Up spins. If you manage to hit 5 on the reels, you will receive the payout of 20x the initial wager as well as the rewarding Rise Up spins.

Testament is definitely an innovative game with crisp graphics and detailed animations. The theme may not be everybody’s cup of tea, but the reward system and multiple features are more than enough to grab one’s attention.