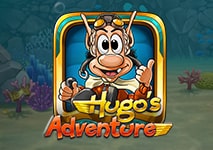 Known for creating outstanding slots, Play’n GO is once again at the center of attention with its Hugo’s Adventure. The game has turned into a massive hit among reel spinners thanks to its unique design and interesting bonus features. Containing 5 reels, 3 rows, and 10 paylines, the gameplay is rather simple but it offers a good-enough number of winning opportunities as it is one of Play’n GO’s slots with maximum volatility. The RTP of the game is between 96.53% and 94.56%, and the bet limits range from $0.10 up to $100.

Released in September 2019, Hugo’s Adventure is a relatively new slot that has a cartoonish appearance. The game offers a maximum win of 5,000x the bet. In addition to that, the slot is compatible with various portable devices based on Android or iOS. The appealing visuals and smooth animations are among the reasons to try Hugo’s Adventure. 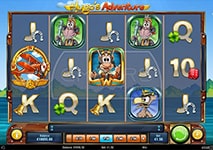 Hugo is a popular media franchise created by Interactive Television Entertainment as far back as 1990. The main character of the game is a small friendly troll who will help you to find some nice underwater riches. Once you load the game, Hugo will be there to greet you. The grid is transparent and it is set at a beautifully designed sea background. Hills and mountains covered with green grass are visible in the distance.

The symbols you will come across while spinning the reels are drawn expertly to make the theme of the game even more overwhelming. The cartoonish appearance of the characters renders a nice touch to the game. We all have a little child inside us and Play’n GO seems to know how to make the most out of this.

The symbols you will come across when playing Hugo’s Adventure are not only nicely drawn but also come with juice payouts. Players need to collect at least 3 identical symbols on a payline to receive a cash prize. The highest payouts come with 5 matching symbols aligning on a single payline.

The wild symbol is Hugo acting as an aviator and replaces all symbols except the scatter. Players should be informed that the scatter symbol can be easily recognized as it depicts a submarine. In addition to that, Hugo will boost your bankroll with up to 50x the stake for collecting 5-of-a-kind on a single payline.

The medium-paying symbols include the troll stewardess, the bird pilot, and the monkey mechanic that come with maximum payouts of 35x, 25x, and 20x the bet, respectively. The pay symbols at the low end are the standard playing card suits. The Ace comes with a maximum payout of 10x the stake, while the King and the Queen feature a maximum winning potential of 7.50x the stake. The Jack and the 10 are paid at the lowest rate, offering a maximum payout of 5x the wager. 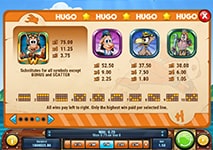 As we already alluded above, Hugo’s Adventure is a slot game that comes with some nice extras. In fact, the real action takes place once you trigger the game’s bonus features. Generally speaking, the slot has 2 bonus features. The first one is called the Underwater Adventure and you can unlock it by collecting 2 scatters on reels 2 and 4.

The submarine scatter will spin to award you with 1, 2, or 3 lives. Then, reel spinners will need to pick treasure chests to win some cash prizes. The catch here is that you can also lose a life, depending on what you will find in the treasure chest.

Once your lives are over, the golden submarine will spin to give you a random multiplier of 2x, 3x, or 5x to further boost the winnings from your picks. It is important to mention that the multipliers add to each other if you have more than 1 life.

The game also offers an Air Ace free spins bonus round that is triggered when 3 airplane symbols land on reels 1, 3, and 5. Provided that you manage to unlock this feature, you will get 9 free spins and 1 life. More lives can be won if a 1+ balloon comes into view on the reels. Slot fans should keep in mind that they need to protect Hugo from the air mine as they will lose a life if Hugo gets hit. What is more, players can win up to 20 extra free spins.

The game also features Flying Wilds that will shift one reel to the left with every spin until it pushes away reel 1. In addition to that, you can land up to 4 balloons each coming with a 2x multiplier, meaning that the multiplier can reach up to 16x. Provided that you still have 1 or more lives left at the end of the feature, you will automatically enter the Underwater Adventure bonus game.

Even though Hugo’s Adventure is an easy-to-play slot, it comes with attractive features embedded in it. The game offers superior graphics and smooth gameplay. Furthermore, reel spinners can win up to 5,000x their bets even on the go, which makes this one-armed bandit so fantastic.