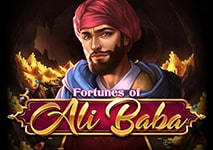 Fortunes of Ali Baba is a relatively new release from Play’n GO, only being available to online gamblers since the beginning of 2020. This one captures the tales of Ali Baba and the 40 thieves in an innovative and intriguing new slot.

The game has a grid of 5 reels and 3 symbol rows with 20 active paylines to land your winning combinations on. Players can indulge in a rewarding RTP of 96.89%. However, some online casinos may adjust that to their standards, so be sure to check it before committing to anything.

Betting in Fortunes of Ali Baba can be done starting from as little as $0.20 and going up to as much as $100. Players that gamble professionally or casually alike will be able to have a share of Ali Baba’s fortune with this game and its maximum potential win of 10,000x the stake. 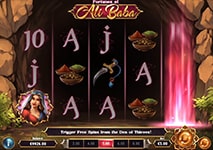 This Play’n GO slot is based on the story of the young boy, Ali Baba. The tale of Ali Baba begins when his father, Khalif of Bagdad, is killed by the soldiers of Hugalu Khan after the betrayal of Cassim, Ali Baba’s brother. This leads to the young boy being raised by a band of forty thieves.

The Fortunes of Ali Baba slot does not feature all of the thieves, but rather just one of them, Ali Baba himself, and a cunning slave girl. When you enter the game, you will find the reels situated at the entrance of a dark cave.

In the Fortunes of Ali Baba slot, players will encounter 9 standard symbols that will help them win attractive cash prizes. There are 5 low-paying icons and 4 high-paying ones. The low-paying ones are represented by card face values – 10, J, Q, K, and A. But the ones you will want to see appear on the screen are the high-paying icons. Those include the 3 bowls, the gemstones, the pendant, and the curved dagger.

There are also some bonus symbols in the game, which include 2 Wilds and a Scatter. The Wilds are depicted as Ali Baba and a Thief, while the Scatter is a cunning slave girl. Wilds can substitute for other icons on the grid except for the Scatter. Scatter symbols will trigger the Den of Thieves feature. 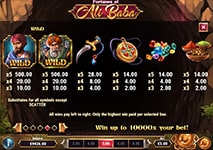 Winning combinations start from groups of 3 identical symbols and go up to 5. Your icons must land on a payline to award a payout. All wins pay from left to right. This slot is full of fun features that help players reach the maximum win potential of 10,000x the stake.

Symbols 10, J, Q, and K all offer a maximum payout of 1.75x the wager, while the A will award 3.5x the stake for 5 on a bet way. The 3 bowls, the gemstones, and the pendant all give players a reward of 7x the initial bet for landing 5 of a kind on the grid. If you see the dagger icon appear on the reels in a winning combination of 5, you will receive 14x the stake in return.

One of the things we liked most in this game is that both the Wilds can form a winning combination with a massive payout. Landing 5 of a kind will result in a win of 250x the initial bet. Both Wilds may stand in for other icons except for the Scatter.

The Scatter symbol is the key to unlocking the Den of Thieves free spins feature. If you see the beautiful slave girl appear on the first and last reels, you will have successfully activated it.

When players manage to trigger the Den of Thieves, they will be presented with a choice of 6 ceramic pots. The aim is to select one of the 6 to reveal a random cash prize, free spins, or you may be caught by the thieves. If you managed to get to the free spins award without being caught, you will be taken to the bonus rounds game board.

Players will be granted 8 free spins to try their luck out on. This feature may only be triggered by the Den of Thieves feature. During the bonus rounds, a Wild Ali Baba is guaranteed on every spin. If you are lucky enough to land another 2 Scatters on reels 1 and 5, you will win an additional 2 spins, and the multiplier level will increase on subsequent turns.

During bonus rounds, Thieves Wilds have an intriguing function as well. They will award 1 free re-spin while holding all available Wilds on the reels. After this, all Thieves Wilds move towards the Ali Baba Wild but leaving more Wilds in their path.

Fortunes of Ali Baba sure is a quirky slot. This Play’n GO release is packed full of rewarding features to assist players in their mission to trick the thieves out of their riches.