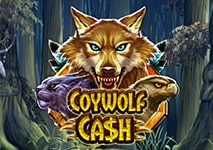 Play’n GO has not stopped working tirelessly to bring online casinos and their customers more and more rewarding slots. Coywolf Cash is another new one, having been released at the beginning of 2020. The theme is wildlife and reflects native American culture.

Coywolf Cash is played on a grid with 5 reels and 3 symbol rows. There are 50 paylines on which to land your winning combinations. Players that join in the fun on the hunt for riches will enjoy the RTP of 96.31% with the maximum win potential of 4,000x the bet up for grabs.

One of the great things about Coywolf Cash is that both casual and professional players can enjoy the spoils. Betting starts from $0.10 and goes all the way up to $100. 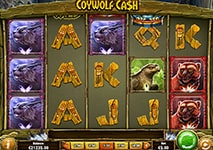 Coywolf Cash is a slot with a native American design. As one would expect, the game is full of different animals and nature-related aspects. The board itself is animated as wooden with eagles on either side of it. There are also spears leaning against the grid.

The game is set in the middle of a dark forest. Engaging music is playing in the background while the wood animals land on the reels, bringing players rewarding payouts. Some of the wildlife you can find in the woods include a grizzly bear, coywolves, and eagles.

Players will encounter 10 different symbols in the payout table. There are 5 low-paying and 5 high-paying ones. The former consist of 5 playing card values – 10, J, Q, K, and A. Different animals represent the high-paying ones. While hunting for cash in the forest, you will happen upon the fox, the eagle, the lynx, the wolverine, and the bear.

You will also run into the coywolf and the alpha coywolf. These guys substitute all other symbols on the grid, except each other and the Scatter. They also form their own winning combinations. There are two Scatters – the Mask Scatter and the Totem Scatter. Each unlocks different bonus features. The Mask may only appear on reel 3. 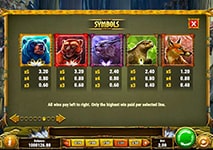 To form a winning combination, players must land 3 or more matching icons on an active payline. In this slot, wins pay from the leftmost reel to the right. Only the highest win per bet way will be awarded.

Landing 5 of a kind of the 10, J, Q, or K icons will result in a payout of 0.4x the initial bet. The A will award 0.6x the stake for a winning combination of 5. If you see 5 of the fox appear on the screen, that will also win you 0.6x the stake. The eagle and the lynx will both award 1.2x the wager if you succeed in matching 5 on a bet way, while the wolverine and the grizzly bear will win you 1.6x the original bet.

Players can tell the two coywolves apart easily. The red one is the coywolf, while the icy-blue one is the alpha coywolf. Both of these form their own winning combination. The red coywolf awards 6x the bet for matching 5 on a payline. If you see 5 alpha coywolves on the screen, you will receive a payout of 30x the stake.

The Totem Scatter will trigger Prey Free Spins if you manage to land 3, 4, or 5 in any position on the reels. You will be granted 8, 11, and 15 respectively. If you see the symbol appear again while the feature is in play, you will receive 2 and 4 additional rounds. Mask Scatter will be added to the Wild Reel during the extra spins for the chance to get up to 4 additional rounds or multipliers up to 7x level.

Landing a Mask Scatter on the grid will activate the Wild Reel. The Scatter will go to the top of the screen and spread over the top of the 5 reels. Players will have access to two tiers of the Wild Reel, one for the base game and one for when Prey Free Spins are active. In the base game, up to 3 alpha coywolves may show, and all positions directly below them become Wild. During Prey Free Spins, up to 4 alpha coywolves may appear and an additional mask may also land on the screen.

Coywolf Cash is another excellent addition to the Play’n GO game library with a nice maximum win potential and an attractive RTP of 96.31%. The outstanding animations and crisp graphics make the slot all the more enjoyable.