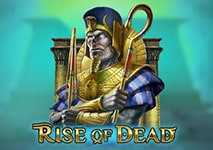 You are to be showered with prizes once you start playing Rise of Dead by Play’n GO, a reputable software company specialized in designing high-end slots. The game is the second title the supplier launched as a continuation of its Book of Dead slot, which has gained a great deal of attention. The video slot comes with 5 reels and 20 paylines, yielding a nice winning potential that reaches up to 5,000 the stake.

When it comes to the maximum RTP of the game, players should be informed that it is set at 96.53%, but it can range. Bets start at $0.20 and the upper ceiling is capped at $100 per spin. Indulge yourself in an ancient Egyptian experience with Rise of Dead and enjoy the nice features the game has to offer. 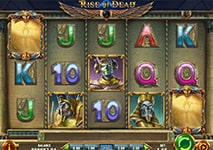 Book of Dead features one of the most common themes in the industry, and more precisely ancient Egypt. However, not all slots are the same – some are better than others, and Rise of Dead is among the best in its class. Each detail is carefully selected to correspond to the overall theme of the game. The symbols are nicely drawn in a detailed manner. From scarab beetles to mummified pharaohs, you are treated to a nice selection of symbols.

The grid is set at the heart of an ancient tomb of dead kings. The music in the background provides the game with a mysterious touch. Dark and cold colors dominate the game to enhance its dramatic effect. Quite reasonably, gold is also included in the color palette of the game.

However, reel spinners should keep their fingers crossed to see the scarab beetle as it comes with the highest payout of 125x for 5-of-a-kind. In addition to that, it acts as a wild, replacing all other symbols but the scroll scatter. The wild symbol appears in stacks of 6 or 7 on each reel. As for the scatter, it can trigger the free spins bonus feature as well as additional spins. 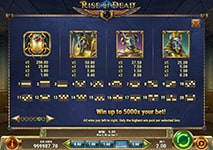 Rise of Dead is an exceptional slot that will keep you entertained even during the base game. While hoping for triggering the game’s bonus round, you will enjoy the Mega Stacks feature that is active on each spin. One symbol will be randomly selected to cover 12 positions on each reel and improve your winning potential.

Another interesting feature you will come across during the base game is the Gif of Gods. It activates on a random basis to cover reels 1, 3, and 5 with identical stacks of symbols. The stacked symbols turn into sticky and the reels spin again.

However, slot fans have the chance to win more free spins provided that 1, 2, or 3 scroll scatters come into view on the grid during the free spins bonus feature. What is laudable here is that there is no limit on the number of free spins one can win.

Furthermore, the Mega Stacks feature is also active during the bonus game and the wild symbol can also be stacked, meaning that you have good chances of winning substantial prizes during the free spins.

If you are looking for an Egyptian style slot, we would recommend you trying Rise of Dead. The game arrived directly from the popular software provider Play’n GO to provide players with a high-quality gaming product. The game is fully packed with features even during the base game. That being said, we consider this slot one of the company’s best games.