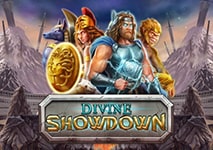 Prepare for a divine battle between 4 gods from different cultures with this Play’n GO release from the end of 2019. Divine Showdown is a thrilling slot that is overflowing with celestial features to help players nab the godly maximum prize of 5,000x the bet.

This one has a grid with 5 reels and 3 symbols rows. There are 20 paylines to land your majestic winning combinations on and a wide betting range. Players can wager as little as $0.20 and as much as $100 on this slot. 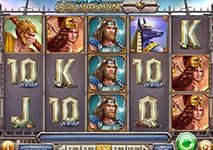 Play’n GO has gone for a theme of gods with this one. However, one type of culture was simply not enough, so they decided to go ahead and throw 4 different divine beings into the mix, thus creating a battle of the gods. The four celestials in Divine Showdown are Thor, the Norse god of lightning, Athena, the Greek goddess of wisdom, Anubis, the Egyptian god of the dead, and Wukong, the Chinese trickster god.

The battleground of the gods is set in an arena of swords that is situated in a snowy range of mountains, while the grid sports a simple gray color. We particularly appreciated the 3D symbols that land on the reels and the engaging soundtrack that both really help bring an air of heroism to the scene.

Players will find a total of 9 symbols in the payout table. The low-paying ones are represented by playing card values 10, J, Q, K, and A, while the more rewarding symbols are the divine gods themselves – Wukong, Anubis, Athena, and Thor.

You will also find a few bonus icons on the reels. These help players unlock special features and win bigger cash prizes. The Wild symbol is the sword and can substitute for all other icons on the board except for the Scatter. Players can identify the Scatter as a pair of Greek-style pillars with some kind of gold top and the 4 symbols of each god that partakes in the slot. 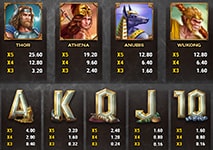 One can form a winning combination on the reels from 3 to 5 symbols. A win pays out when it lands on one of the 20 active paylines. All wins pay from the leftmost reel to the right.

Both the 10 and the J will award players a payout of 1x the stake if they succeed in landing 5 of a kind on a bet way. Landing 5 Qs on a payline will result in a payout of 1.5x the stake, while the K offers 2x the bet. The A will give players a win of 2.5x the bet for a winning combination of 5.

Now, for the more rewarding of the lot, the gods. Wukong and Anubis both award payouts of 8x the stake for 5 of a kind on a payline. If you see Athena appear on a bet way in a combination of 5, you will receive 12x the initial wager. Finally, Thor is the biggest giver of them all. Land him on the reels 5 times simultaneously to reap a reward of 16x the bet.

Players will notice there is a multiplier at the top of the grid. This can randomly activate, applying a multiplier level of anywhere between 2x and 10x on any spin, including Power Spins.

The Wild symbol can stand in for others, except the Scatter, to help form and improve winning combinations. This allows for bigger and better overall payouts. Not only that, but it also forms its own winning combination with a payout of 20x the stake for 5 of them on a payline.

Scatter symbols are the key to unlocking free spins and a battle between the gods. If a player lands three on the screen in any position, strthey will be granted 3 lives with which to battle for your free spins. Before that, they will be allowed to select which of the 4 gods they would prefer to battle with. Each god has different perks.

Wukong can turn between 1 and 1 reels entirely Wild at random, while Athena can synchronize the outcomes of any 3 reels. Anubis will turn all instances of between 1 and 2 symbols on the reels Wild. Thor transforms all other gods that appear on the grid into his own likeness.

Each free spin will turn the reels, and the corresponding bonus from the selected god will be applied. After players reap their rewards, a selection of the remaining 3 gods will appear and a green arrow. Either a battle will occur between your god and a randomly selected god, or you will be awarded a free re-spin if it lands on the arrow.

If a battle between the gods is started, players will see a mini gameboard appear with a grid of 3×3. Only 2 types of symbols will appear – each one representing either god. Whoever’s icon appears as a majority on the board will win the round. This will mean you will not lose a life and can proceed to your next free spin. Gods have a total of 3 lives and may continue fighting in free spins until they lose them all.