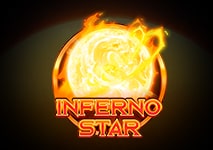 Inferno Star is a fruit-themed slot developed by the ace software company Play’n GO. At first, the name of the game deluded us that Inferno Star features a diabolical theme, but that is not even close to the truth. The name of the slot refers to the glowing Sun that is also visible in the background. Inferno Star has a classic 5×3 setup with just 5 set win lines. Its RTP is 96% and it is listed in the company’s list of highly volatile slots.

Inferno Star seems to be the perfect game for amateur players as the minimum bet limit is as low as $0.05 per spin. Of course, high-rollers are also welcome to test their luck on this game as the maximum bet limit is set at $100. The game offers a maximum win of 2,500x the stake, which is quite satisfactory. 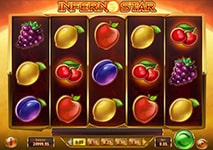 The soundtrack in the background is quite airy, adding excitement to the game. To make a nice contrast with the symbols, the grid features a dark color. The game will boost and replenish your energy thanks to its vibrant colors and crisp visuals.

You can start collecting fruits from the very first spin and all fruits can pay out juicy prizes if you land 3, 4, or 5 identical symbols on a payline. The watermelon and the cherries can pay you up to 75x the stake. The apple, the plum, the lemon, and the grapes all come with a maximum payout of 25x the stake.

The burning sun has one of the nicest payouts of up to 500x the stake. Undoubtedly, the premium symbol is the Raging Sun that can boost your bankroll with up to 2,500x the wager for 5 on a payline. It also acts as a scatter in the game, triggering the re-spin mode. Interestingly enough, the game has no wild symbol. It is important to mention that wins are paid from the leftmost reel, except wins containing scatters which pay regardless of their position. 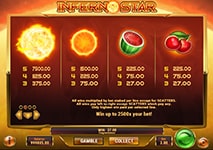 As you most probably already noticed, Inferno Star is a relatively straightforward video slot with simple rules. The game has only 1 bonus feature that is called Raging Sun Scatter. Provided that a scatter lands on reel 3, you will unlock the Raging Sun Re-spins mode. The entire reel containing a Raging Sun symbol will be locked in place and the remaining reels will respin.

Players should be informed that all sun symbols will morph into Raging Sun scatters. Provided that a sun symbol comes into view while the respin mode is active, players will receive an extra free respin, while the symbol will be held. The feature is active until no more sun symbols appear on the reels or there is a sun on each reel.

Inferno Star is a well-constructed slot by Play’n GO that offers some nice winning potential. The game stays true to the original roots of the genre, offering simple game rules. Visually, the game is appealing and the fact that its volatility is high attracts the attention of many slot fans. The game maintains a high level of integrity as all details fit the overall theme of the game.