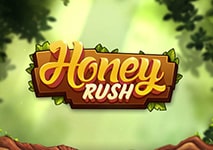 If you have a soft spot for bees, honey, and winning money, you are going to adore this Play’n GO release. Honey Rush is a fun slot that is buzzing with opportunities to win some big prizes. More specifically, to win up to 9,000x the stake.

The grid of Honey Rush sports a hexagonal shape with 7 reels to try your luck out on. There is no consistent number of symbol rows, however, courtesy of the hexagonal design. The symbol rows go like this – 4-5-6-7-6-5-4. There are no paylines, but there are cluster wins.

Players can place bets from as little as $0.20 to as much as $100. This is great, as both micro rollers and high rollers can enjoy this cute little game full of flowers and giving insects. 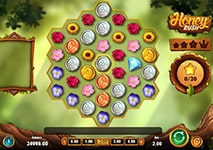 The theme is quite obvious – bees and honey. These adorable little buzzy creatures are so giving, in terms of money and honey in this case. While spinning the reels, you will encounter several little flowers of various colors as well as little coins with bee-themed things stamped on them. The hexagonal grid itself is in the form of a honeycomb.

In the background, players will note that the board is situated in the middle of a cheery forest. You will see luscious greenery, leaves, and cute little mushrooms surrounding the trunks of trees. If there was one word to describe the feel of the game, it would be cheerful.

Players will encounter a total of 8 symbols in the payout table. There are 4 low-paying ones – a little blue viola, a pink hibiscus, a pink rose, and a yellow sunflower. The high-paying ones are also 4 – a bronze coin with a honey drop on it, a silver coin with a honeycomb on it, a golden coin with a bumblebee on it, and a diamond being the most rewarding of the lot.

You will also encounter another giving symbol when spinning the reels of Honey Rush. That would be the Wild, which is depicted as a honey pot. This icon can substitute others on the grid and may also hold multipliers. 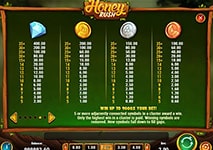 To form a winning combination, players must land a cluster of 5 or more symbols. The cluster must be formed from only adjacently touching icons. If you do so, you will receive the corresponding payout.

The highest-paying combination one can land on the reels consists of 35 or more icons. If you manage to land a winning combination of 35+ of any of the low-paying icons, you will receive 20x the stake.

Players that manage to form a cluster of 35 or more bronze coins will receive 50x the original bet. For a group of 35+ silver coins, one can expect a payout of 75x the wager, and for the gold coin, 100x the bet. Finally, for the big diamond, if you manage to make a bunch of 35 or more of them, you will win 200x the initial stake.

You will note that the Honey Rush slot has that cascading feature we all love so much. This means that any time a winning combination lands on the reels, the symbols that partook in the win will be removed from the grid and will make way for new icons to cascade down into the free spaces. The fun feature allows for consecutive wins.

There is a Rush Meter to the left of the reels. This will fill up 1 rush for every icon that partakes in consecutive rolls, including the first one. Four levels are included in the meter and are achieved after 20, 40, 80, and 160 rushes.

Levels one, two, and three will activate the Drone Colony and award 1 sticky wild each time. However, if you are lucky enough to get to level four, you will trigger the Queen Colony.

Wild symbols are also triggered by the rush meter only. They may hold multipliers of 2x or 3x, and they are sticky. Every time you land a win, they will shift to an adjacent position before the remaining symbols disappear off the reels, allowing for a higher chance of winning the big jackpot of 9,000x the stake.