If we were to think about the most famous place that offers endless gaming entertainment and exciting night life, the first city that comes to mind is Las Vegas. This resort is home to some of the most prestigious casinos on a global scale which have been in the gambling industry for a considerable amount of time. It attracts hundreds of visitors on a daily basis as it offers everything one player could ask for.

Almost every casino located in this area gives you the chance to play blackjack, along with some extremely exciting variations. One of them even gets its name from this renowned city due to the fact that it was initially played only there. Nowadays Vegas Strip Blackjack has become so popular that it can be found in various online casinos which enable players from all over the world to enjoy this version.

Vegas Strip Blackjack is one of the most popular variations of blackjack which can be played either as a single-hand or a multi-hand game. As a version of the classic game, its basics and fundamental rules are the same. The dealer represents the casino and you compete against him only. Your main goal is to form a hand whose total is as close to twenty one as possible, however if you surpass this number, you go bust or in other words, you lose your bet.

In order to determine the total of your hand, you should add up the value of your two initial cards. For this purpose blackjack has its own card system according to which the face cards are worth ten points, the ace can be counted as either one or eleven and the rest of the cards are counted as the numeric value on them. Just like in the classic game, in this version you have the chance to choose from four options – to hit, stand, double down or split. Bear in mind that your decision should be based not only on the total of your hand but also on the up card of the dealer. 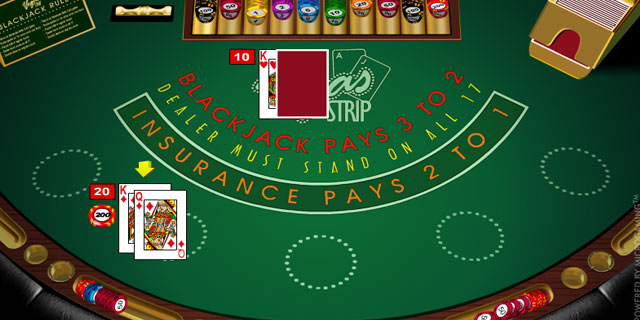 Even though this variation highly resembles the classic game, it has its own specifications and distinguishable differences. One of them is that the game is played with four standard packs of cards which are reshuffled after every round. It should be noted that initially this variation was played with a single deck, but not any more as nowadays there are many efficient card counting systems thanks to which players can significantly increase their odds of winning. The dealer deals the cards from a shoe or in other words from a box, especially designed to serve this purpose.

In Vegas Strip Blackjack, you are allowed to split to a maximum of four hands and after you have made this move, you are permitted to double down. Also, you can double down on any two cards which works in your favor. When it comes to a pair of aces, it can be split only once and if any of the aces get a 10-valued card, this combination is worth twenty one instead of blackjack. You can split any two cards of the same value such as a queen and a jack. In order to take advantage of this move, you need to place a wager whose amount is the same as your original bet. It is also permitted to re-split pairs, however you can do so only twice.

This variation usually has the standard payout for blackjack – 3/2, although you can also find games which pay differently. Some casinos offer a payout of 6/5 which is the reason why it is always best to check the payout of the game you are about to play in advance. Another key point in this game is the fact that the dealer is required to stand on soft 17. Also, in this variation of blackjack you are deprived of the surrender option, meaning that you cannot give up your hand and keep half of your original wager if you are bound to lose.

Just like in the classic game, at the beginning of this variation you are required to place your bet. After that, you get your first two cards which are dealt to you face up. The dealer also gets two cards, however only one of them is exposed. The other face down card is the hole card which he is required to check if his up card is an ace. In such cases, you are offered the option to take insurance or in other words, to place a bet whose amount is half of your original wager. If the dealer ends up having blackjack, then you win this bet but you lose your initial one. In this version, its payout is usually the standard one of 2/1.

It should be noted that if you split your hand after you have taken insurance, you automatically lose the bet. 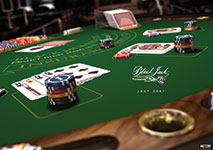 In general, the house edge of this variation is fairly favorable for players, providing that the game is played with the above-mentioned rules. However, some casinos offer slightly different rules for several reasons such as to attract more players and to make the game more enticing or to simply increase the house edge. If you want to be able to fully enjoy the game and have fun, it is essential to play a variation which offers you realistic chances of winning. Therefore, let’s have a look at some of the blackjack rules and how they influence the house edge.

If you bump into a game in which the dealer is enforced by the rules to hit on soft 17, you should bear in mind that this rule works in favor of the casino. In fact, it increases the house edge with approximately 0.22%. Another altered rule which is not beneficial for you is when you are deprived of the chance to double down after you have split a pair. As you might have already gathered, the different payout of 6/5 for blackjack also works against you.

Before you join a blackjack table, always get familiar with all of the rules this game offers. The reason why is that most of them are altered to work in favor of the casino and to decrease your chances of winning.

Vegas Strip Blackjack is a fast-paced variation which offers you a high level of entertainment and excitement. Thanks to it, you have the chance to put your skills to the test and try your luck while having fun. This variation can be found in various brick and mortar casinos as well as online which enables you to choose the most convenient way of playing. It can be undoubtedly a great source of entertainment, just make sure that you are acquainted with its rules and gameplay in order to be able to fully enjoy yourself.