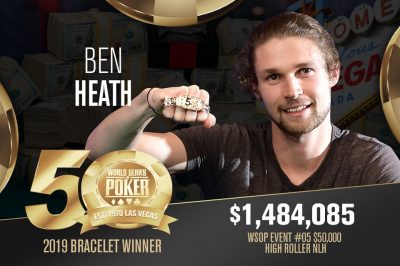 The UK poker professional Ben Heath has taken down the WSOP $50,000 High Roller event, claiming the first 7-digit payday of the series’ latest edition. The Brit conquered the event, taking home a prize of $1,484,085 and his first career World Series of Poker gold bracelet.

This year, the $50,000 High Roller event saw a total of 110 entries register, with the group of players who were able to pay such a large buy-in being relatively limited. Considering the fact that the entry field for the event was not that large, one could predict a final table packed with familiar faces, and that is what actually happened.

Three days after the beginning of the High Roller event, there were only six players remaining from the overall 110-entry field. Ben Heath was the only one who has never won a gold bracelet in his career, with him facing five former bracelet winners. Some would say that the odds were never in his favor, but the UK poker pro proved otherwise, as he managed to defeat all his opponents to emerge victorious from the competition.

The victory brought Heath his second-career seven-digit live cash and the largest monetary prize in his career so-far, boosting his all-time live earnings to $4,531,085. 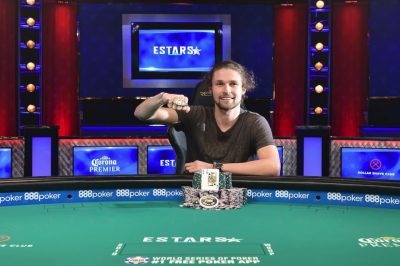 As mentioned above, only six players were left around the final table of the NLHE high-roller event, with five of them being former bracelet winners. However, it was Ben Heath who got the chip lead at the time he had to face a number of experienced high rollers.

It took the Brit only about five hours of play to emerge as the event winner and pose with the trophy and his first-ever WSOP bracelet. In any case, it was not easy for Heath to win the event, especially considering the fact that he had to battle with some of the best contemporary high rollers, not to mention that he lost his chip lead to others topping the counts on a number of occasions.

The 50th Annual $50,000 High Roller Final Table starts at 12pm. You can watch exclusively on @PokerGo starting at 1pm.

At the time when the final table was formed, Nick Petrangelo and Dmitry Yurasov were the ones with the shortest stack. Heath, on the other hand, managed to initially build out a chip lead but failed to keep it during the entire day, with chip lead changing its holder several times. At a time when it seemed like the victory is slipping away from him, the Brit managed to turn things around winning a controversial hand against the Russian poker pro Yurasov.

In the end, Heath only had to beat Andrew Lichtenberger, and he did manage to do that, leaving his opponent on second place and triumphing with the event’s trophy.

With Ben Heath emerging victorious from the WSOP $50,000 NLHE High Roller event taking home a $1,484,085 prize, it was Andrew Lichtenberger from the US who occupied the second place. He was granted a monetary prize estimated at $917,232. Sam Soverel remained third, earning a prize of $640,924.

The Russian poker player Dmitry Yurasov was fourth, followed by Nick Petrangelo. The sixth place was taken by Chance Kornuth, who was the last player forming the event’s final table. Elio Fox remained seventh, followed by Cary Katz and Davin Einhorn, who took the eighth and ninth position, respectively.