Chicago residents received the first opportunity to vocalize their opinion about Mayor Lori Lightfoot’s plan for Bally’s Corporation to establish the first casino in the city – a meeting that put the company’s officials on the defensive side.

As previously reported, the Bally’s Corporation plans to establish a $1.7-billion casino and hotel resort in the River West neighborhood of the city. According to the company’s officials, the casino resort project will include a gaming floor for 170 table games and 3,400 slots, more than 500 hotel rooms, a 3,000-seat theater, an outdoor music venue, as well as an extension of the Chicago Riverwalk.

The company projected that the venue’s development will create over 3,000 construction jobs. More than 3,000 permanent casino jobs are also set to be created, according to Bally’s, with at least part of that number set to be occupied by work union members. Under its deal with the city, the company has agreed to commit to 60% minority hiring and is set to target Chicago neighborhoods that feature the highest levels of unemployment in the city.

Soo Kim, the chairman of Bally’s Corporation, confirmed that the operator had made a promise that the company would do its best to help underrepresented groups and neighborhoods where there are many unemployed people. The company’s chair further noted that the fact the operator’s new casino resort is set to be hosted in Chicago is a responsibility and would serve as the beginning of a long relationship. 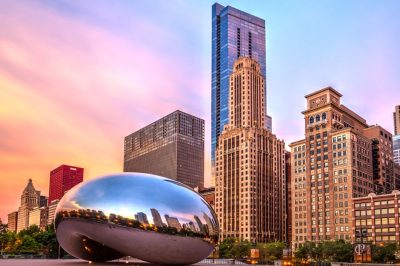 The agreement with Bally’s Corporation has drawn criticism from both local officials and the area’s residents, with some of them insisting on seeing an actual plan for new jobs and work contracts. Furthermore, Chicago residents are also urging Bally’s Corporation to present a safety plan aimed at helping some areas around the casino safe.

The gambling company shared that it would coordinate its safety efforts with the city police, and promised to invest no less than $5 million in security on an annual basis.

Chicago’s city leaders have shared hopes that the relationship with Bally’s Corporation will be a long-lasting and positive one for all the participating parties. Jennie Bennett, the chief financial officer of Chicago, described the casino project as a critical one for the financial stability of the city and an excellent source of additional tax revenue that would be spent on boosting police and fire brigade’s pension funds.

During the latest meeting with local officials and residents, the company that is supposed to establish a massive gaming complex in River West faced much skepticism, as the project’s opponents worry that it would increase traffic and crime in the region. Some local residents criticized Mayor Lori Lightfoot for approving the casino proposal in this exact residential area and noted that public safety must be a matter of paramount priority for both the investors and the local officials.

Bally’s Corporation and the city officials who have supported the project, are expected to face even more scrutiny in the upcoming weeks as the proposed $1.7-billion project moves through the City Council.