Sahara Las Vegas has become the first casino property on the Las Vegas Strip and the Southern part of the state to receive a regulatory complaint associated with violation of coronavirus safety protocols.

On August 5th, the Nevada Gaming Control Board issued a complaint against the aforementioned casino resort. The Board alleged the Las Vegas Strip-based gambling venue that it failed to comply with the social distancing measures unveiled as part of the emergency health and safety orders of Governor Steve Sisolak after the reopening of the property in June. The final word in the case will be the one of the Nevada Gaming Commission, which could either impose a financial penalty on the casino or suspend or revoke its operating license due to failures to comply with the regulation in question.

As part of the state’s efforts to tackle the further spreading of the coronavirus infection, Nevada’s Government had issued a number of executive orders regarding some limitations imposed on casino operations since the mid-March. The Gaming Control Board, on the other hand, has unveiled a bunch of policies aimed at ensuring special safety protocols in local casinos to control the spread of Covid-19.

The complaint against Sahara Las Vegas was signed by the Gaming Control Board’s members on August 3rd. It provides details of the casino resort hosting a lunch event at which more than the allowed 50 people were present and also alleges the casino of failing to ensure the necessary social distancing required at slot machines and table games. 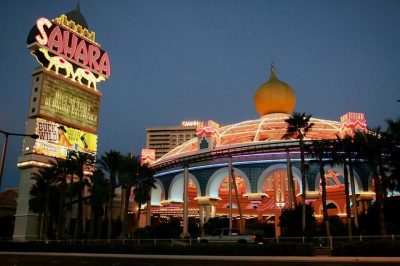 The Nevada Gaming Control Board cited four incidents in which there were some violations on the casino’s part, with three of the incidents occurring on June 16th. The first incident involved a violation of the Board’s social distancing policy in casinos at a craps table. On the same date, a similar incident occurred at a blackjack table, while the third one involved a violation of social distancing rules at a slot machine. The fourth incident occurred on July 23rd, with Sahara Las Vegas allowing a local trade organization to host a lunch event in its Congo Conference Rooms. The Gaming Control Board’s complaint claimed that 135 people were present at the event, breaking a policy of the state government under which no more than 50 people are allowed to gather in one place.

As confirmed by the complaint, Sahara Las Vegas casino officials confessed the problems and corrected them. The casino, however, has not revealed so far whether it would challenge the Board’s complaint at the time when a hearing at the Gaming Commission is held.

The casino officials shared in their statement, Sahara Las Vegas takes its duties as a licensed gaming operator seriously and aims at being in line with health and safety standards unveiled by the Governor and the state’s gambling watchdog. They further said that they made sure the necessary corrections in the casino’s social distancing protocols were made.

This is not the first time when the Nevada Gaming Control Board filed a complaint against a gambling venue in the state. Before that, the Board had filed four other complaints, but all of them were against smaller gambling properties in the rural part of the state. Last week, the Control Board revealed that a total of 156 investigations were currently underway as a result of more than 10,130 agent inspections because of suspected health and safety policies compliance failures.