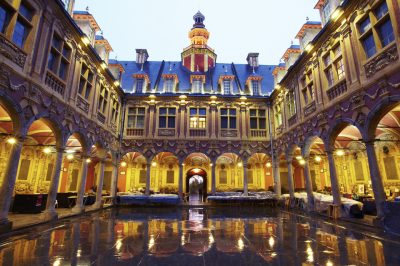 PokerStars is one of the leading brands in the international poker industry which always has riveting festivals on offer for the most eager to lay their hands on some of the impressive cash payouts available. Such is the case at its latest stop which brings action to Lille, France over the span of an entire week. Across the numerous events available in the schedule, players would have the chance to showcase their full potential on the felt.

Lille is among the most picturesque cities in France situated at the northern tip of the country close to the border with Belgium. This strategic positioning is no coincidence or a random choice since the major poker operator is willing to attract as many poker enthusiasts to its events as possible. The proximity to Belgium is going to provide more of them with the chance to make their way towards the poker festival and give their luck a try at one of the attractive tournaments.

Over the span of a total of seven days, Lille will be transformed into France’s hotspot when it comes to poker, as each day will bring several poker events to the participants. Starting Monday the first enthusiasts present had the chance to experience the €300 No-Limit Hold’em Super Deep Stack which gave them a starting chip stack of 50,000 in order to go deep in the poker tournament. This event is a multiple-day one and it is set to continue up until Wednesday, giving all players enough levels to reach the coveted cash prizes.

A single re-entry was available to the participants and all of them who made it to the official Day 2 were in for the money. Tuesday brought a couple of single-day events to the liking of €150 No-Limit Hold’em Turbo Survivor which also featured a single re-entry option for the players as well as a starting stack of 10,000 in chips. Today is set to bring another exciting tournament to anyone interested and this would be the €250 No-Limit Hold’em Knockout event warming up the field for the major tournaments coming ahead. In this type of events, a cash bounty is granted for every player eliminated by a given participant which amps up the motivation factor. This style of poker action is becoming progressively popular in the international poker field. The main star of this poker festival is expected to take over Casino Barriere on Thursday, as this is when the Main Event is scheduled to take place. It is going to feature a buy-in amounting to some €1,100, providing for a significant total prize pool for the top positions on the official leader board at the end of the event.

The starting stack available at the beginning of poker action would amount to some 30,000 in chips, giving participants the chance to operate with their chip counts as they deem appropriate. Every player would have the opportunity to re-enter the race once if they are eliminated sooner than expected. With three starting flights spread across Thursday and Friday, all enthusiasts will have the chance to make their way into the event and potentially deserve their spot on Day 2 which is set to take place on Saturday.

Friday is also scheduled to welcome another interesting tournament and its first starting flight and this would be the PokerStars Festival Cup featuring a buy-in amounting to €330. The 11th event for this festival stop would grant every player with a total of 10,000 in chips at the beginning of the action and would continue well into Sunday when the last day of poker action would take place. There is also the High Roller event, considered to be the diamond in ever poker festival around the globe.

This one would feature the largest buy-in reaching €2,200 which would also equal a considerable total prize pool for the top positions on the official leader board. Commencing on Saturday, this two-day event would bring some 30,000 in chips to every participant at the beginning of Day 1, whereas the Final Day and the Final Table would grant some of them with generous payouts, a trademark of every PokerStars Festival regardless of the location.