Super High Roller Bowl Returns for Its Fourth Edition this May 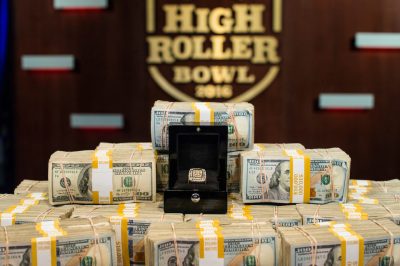 The poker field seems to have a live or online festival in progress at any given moment and this only provides the players with many options to choose from. It was recently announced that the official start of the $300,000 Super High Roller Bowl will return for its fourth edition this May and the generous prize pool it has on offer is guaranteed to attract the attention of poker players from around the globe.

The first edition of the anticipated poker event took place back in 2015 when poker players had their first chance to enter the premium event and showcase their skills on the felt. Back then the buy-in for the premium event amounted to $500,000, but it was reduced in the following year, dropping to $300,000. Ever since then this annual event has been gaining quite the popularity among people in the industry, resulting in larger prices and more tempting offerings available for the players. This year the poker tournament returns to Aria Resort and Casino loaded with intriguing payouts for the top positions on the leader board.

The buy-in for the event amounts to $300,000 which will guarantee that the high rollers have the chance to double and triple the buy-ins they have used to enter the tournament. In order to claim their spot at the event, all participants have to make a registration at Aria and provide a deposit amounting to $30,000 which is non-refundable by default. There is also a limit to the players which could participate in the event, as there are only 48 available spots. As many as 18 of them will be VIP players, as Aria reserves the right to appoint those seats for the said high rollers.

Additional Information Regarding the Tournament For the players which submit their registrations after the initial 48 spots are filled in, there will be a lottery which will decide the official player list, including the potential winner of the big prize, who will bag some $5,000,000 at the end of the final table. According to the people from Poker Central, the guaranteed prize pool for the event amounts to more than $14 million. The official start of the registration for the Super High Roller Bowl will be given on 1st March when all enthusiasts willing to demonstrate their skills on the felt will have their chance to claim a spot.

Throughout the years this event has enjoyed quite the attention from well-known names in the entertainment and the poker industry. In previous editions of the Super High Roller Bowl celebrities to the likings of Kevin Hart, who performed quite well. The 2016 edition of the poker event brought a riveting heads-up duel between Fedor Holz and Rainer Kempe, both renowned poker players with stellar live performances. Among the other proficient poker players who have participated in the tournament so far have been Daniel Negreanu, Phil Hellmuth, and Antonio Esfandiari. This May guarantees even more talent and skills showcased on the felt.