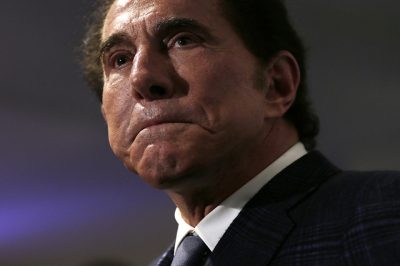 The last few days saw the rapid development of one of the biggest scandals in the international gambling industry so far in 2018 and it involves casino mogul Steve Wynn, who is the Chief Executive Officer of Wynn Entertainment. Following the surfacing of allegations of sexual misconduct which were publicly announced by Macau’s gambling regulator, a wave of investigations into the business of Mr. Wynn took the field by a storm. According to the most recent reports, the shares of the company have dropped more than 19 percent as the gambling billionaire lost as much as $463 million.

As a result of the alleged accusations which were reported by the gambling regulator of the biggest gambling hub in the world, the empire built by the founder of the company is suffering great damage an is threatened by taking even bigger hits. Numerous booking companies which work with Wynn could opt for no longer supporting the business and be in partnership with the gambling operator which has numerous locations around the world. This would result in an even further drop of the Wynn Resorts stocks, according to experts in the field.

Some of them, like Harry Curtis from Nomura, claimed that these allegations lead to a serious questioning of the core values of the brand and the way Mr. Wynn has conducted its business throughout the years. So far after only a couple of days since the announcement, Mr. Wynn decided to resign as the Finance Chairman at the US Republican National Committee but remained at his position that the allegations are false, claiming that this is a smear campaign related to his divorce proceedings.

In a recent statement, it was announced that the will be investigated by a committee of independent directors headed by Patricia Mulroy, who is a board member and former member of the Nevada Gaming Commission.

Consequences of the Investigation Process At the moment there are the concerns that the Chinese President Xi Jinping could be qualified as a supporter of the feminist movement and next year many casino operators in the area will have to renegotiate their operation licenses. It has been forecasted that the process will be harder than ever. At the same time, Wynn is in the process of building a new casino venue in the Boston suburb of Everett which is estimated to cost as much as $2.5 billion.

Following the scandal, law firm Pomerantz LLP began investigating Wynn Resorts Limited on the grounds of alleged security fraud. In a statement issued this Monday the firm claims that it is investigating the operator and its officers and directors. What they are trying to discover is whether or not there have been any security frauds or other unlawful practices conducted by the management of the company. Shortly after the announcement, a spokesperson of Wynn stated that the casino operator is willing to fully cooperate in the investigation process.