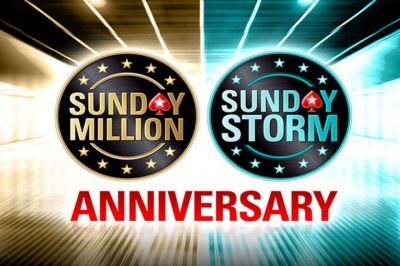 PokerStars recently announced that it has decided to celebrate the anniversaries of two important poker events by introducing bigger and better guaranteed prize pools for their participants. The 2018 edition of the Sunday Million and the Sunday Storm will see a boosted guarantee for the two tournaments combined amounting to some $11 million, which can, in turn, secure a generous payout for all players who reach the top positions on the leader board. Both events will take place on 4th February, leaving poker enthusiasts with a short amount of time to qualify.

This year brings a lot of excitement for fans of the poker brand from around the world, as there are so many new offerings and returning festivals. The first anticipated event which is currently in progress was the PokerStars Caribbean Adventure returning after it took a break in 2017. Players from around the world were enthusiastic to play in the tournaments with bigger than ever guaranteed prize pools, one of which was the Main Event featuring a $10,000 buy-in. This February is sure to bring even more riveting moments on the felt, as two of the signature tournaments for PokerStars have their anniversaries and should be celebrated for what they have on offer.

This year will be the 12th consecutive one for the Sunday Million event, which always has on offer good winnings. With a buy-in amounting to some $215, this event is now going to boast a guaranteed prize pool amounting to the whopping $10 million and a whole million will go to the lucky first-place winner. It could be recalled that the event had its first edition back on 6th March 2006 and has been going strong ever since then, bringing lots of winnings throughout the years. The other iconic event is the Sunday Storm, celebrating its seventh edition this February. It is well known for its low buy-ins and this ear will not disappoint, as players will have to pay the mere $11 for participating. In return, they are going to play for the prize of $100,000 given to the big winner. The rest of the positions on the leader board will also be boosted by the guaranteed prize pool amounting to $1 million. Since the news about the bigger guarantees travels fast, PokerStars expect even bigger interest and this will result in potentially larger total prize pools.

There is also the special offer which applies to those who manage to cash in both events. Those participants will be entered into a single freeroll which will grant two of the players with the coveted Platinum Passes to the PokerStars Players No-Limit Hold’em Championship, taking place in the Bahamas in January 2019.