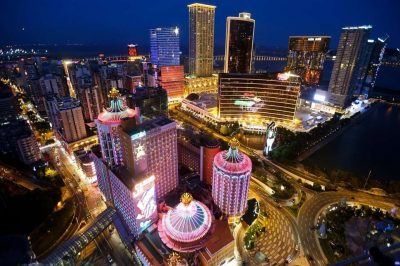 The gambling industry in the biggest gambling hub in the world, Macau, might be going through a rough patch later this year, but at the moment gambling revenue is at its best rates since July 2017. The recent announcement of the revenue rates made an immediate impact on the state of gambling operators which have their business around the world as well as in the gambling hotspot.

Well-known names to the likings of Wynn Resorts, Las Vegas Sands, Melco Resorts and Entertainment, as well as MGM Resorts, saw their stocks surge considerably as experts claim that this month’s year-on-year gross gambling revenue could rise to 24 percent.

The information about the generous revenue rates comes from brokerage Sanford C. Bernstein Ltd. and in the public announcement made by the experts, it is stated that if this rate is reached, this would mean that Macau is performing the best since July last year. The monthly casino gross gaming revenue is an important factor when it comes to estimating the profitability of a given gambling location. Analyst Vitaly Umansky, Zhen Gong, and Cathy Huang stated that judging by the current rates of daily revenue, there is a possibility that their previous estimations will be exceeded and January’s year-on-year increase could amount to 24 percent.

It could be recalled that back in July 2017 the gross gaming revenue in Macau soared 29.2 percent in year-on-year terms, marking a high point for the gambling hub, but ever since that month there has not been a better performing month. This announcement resulted in a jump in the shares of some of the leading gambling operators which manage locations in the Chinese special administrative region, which is also the only place in China where gambling is considered legal. Wynn Resorts shares saw a surge of 1.9 percent, whereas Las Vegas Sands’ made it to a 2.3 percent jump. This marked the day with their best levels since 2014 which could be estimated as an achievement. In the meantime, the shares of Melco Resorts and Entertainment rose 3.3 percent, reaching the highest advance among all operators, followed closely by MGM Resorts which gained some 2.85 percent.

This jump was also a record high for the Vegas-oriented gambling manager, wrapping up the day on a positive note. Following two years of steady double-digit declines for the local gambling field, Macau is finally on its way in an upwards direction.Earlier this month Wynn Palace and Parisian Macao saw the addition of a total of 50 brand new live-dealer gaming tables, following a submitted application to the Gaming Inspection and Coordination Bureau.

In the meantime, there have been some warnings expressed regarding the high roller sector of Macau and the revenue those players are expected to bring in particular. Since December 2017 the Gross Gaming Revenue of high rollers has been gradually going down. There are forecasts that this amount is going to go even lower after the month of July due to the expected changes in the regulations in China.