Rich Wilde and the Shield of Athena Slot Review 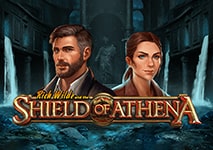 This time the popular character of Play’n GO games Rich Wilde is heading to new adventures in Greece. If you are looking for a slot that can ensure a fun and rewarding experience you can start spinning the reels of Rich Wilde and the Shield of Athena.

This video slot spreads across 5 reels and 3 rows, with 10 paylines that will award payouts for matching identical symbols. If you are ready to take on the journey, along with Rich Wilde and his daughter Cat Wilde, you can give this slot a few spins.

To make the gameplay even more intriguing and rewarding, Rich Wilde and the Shield of Athena also incorporates special symbols and features. This can lead to very fruitful results that will make your spinning adventure worth a while. Play’n GO is well known for the remarkable quality of its games and this slot is yet another example of that. 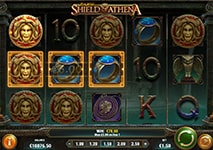 Since the two main characters of the game have headed on a journey in Greece, you will encounter plenty of symbols inspired by ancient Greek mythology. The grid is surrounded by columns reminiscent of ancient Greek buildings, while in the background, there are cascading waters.

The entire ambiance of the slot is dark and hints about the dangerous but thrilling adventures that await our heroes who are in the search for Athena’s shield. The symbols used in the game also fit the entire theme and are closely related to the Goddess of War. Meanwhile, the sound effects and the crisp graphics of the slot will help you to fully immerse yourself in the game.

The symbols used in Rich Wilde and the Shield of Athena will grant payouts whenever they are matched 3 or more times across a payline. All wins of the game pay whenever a winning combination starts from the leftmost reel and continues to the adjacent reels.

The low-valued icons of the game include the playing cards between 10 and A. The lowest payout is given for matching 3 or more 10s while the rest of the card values award slightly better wins. The high-paying items include a Golden Owl, the Pendant of Courage, the ring of Wisdom, and the Helm of Athena.

Medusa, which is the gorgon on Athena’s shield, offers one of the highest payouts in the game and can turn Wild at any spin. The other Wild of the slot is Rich Wilde, with both of the Wilds being able to offer very high payouts and substitute for other symbols but the Scatter. Meanwhile, Cat Wilde is the Scatter icon that can trigger the special feature of the slot. 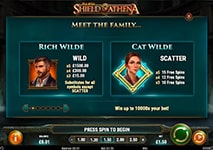 Players will be able to enjoy a payout whenever they match any identical icons 3 or more times on any of the 10 paylines of Rich Wilde and the Shield of Athena. All wins pay only from left to right, starting from the far left reel.

While Rich Wilde and the Medusa symbols can replace other icons as they are Wilds, they can also grant some of the biggest payouts when they are matched 3 or more times on a payline. What is more, while the gorgon can pay 5,000x your line bet when it is matched 5 times, if Medusa turns Wild, it will award 10,000x your bet per line for Five of a Kind.

As mentioned above, Medusa is one of the special symbols as it can randomly turn into Wild and help you complete winning lines. In addition to that, whenever a Wild Medusa symbol lands in the game, it will remain in its position and will trigger the Medusa’s Respin Feature. This will initiate a respin with both Wilds and winning symbols remaining in their positions. This special function is active until no more Medusa Wilds and winning combinations appear on the reels. This feature can also be triggered during Free Spins.

The Free Spins are activated whenever the Scatter symbol lands 3, 4, or 5 times, awarding respectively 10, 12, or 15 spins. Medusa Respins will always remain active during Free Spins and All Rich Wilde and Cat Wilde symbols that land on the reels will be transformed into Medusa Wilds. In addition to that, 3 or more Scatters have the ability to retrigger the Free Spins feature, allowing you to stack up major wins. While the bonus feature is active, 3, 4, or 5 Scatters will respectively award 10, 12, or 15 additional spins. Combined with the Medusa Respins, the bonus spins can lead to huge payouts that can make your spinning adventures extremely lucrative.

If you are up for new adventures, you can follow Rich Wilde and his daughter Cat Wilde and embark on a fun journey. Look out for Athena’s Shield as it can quickly make your spins more lucrative, fun, and exciting. Rich Wilde and the Shield of Athena is a slot with very high volatility, which means that small wins are not that regular but you can end up with generous amounts if you play for a while.