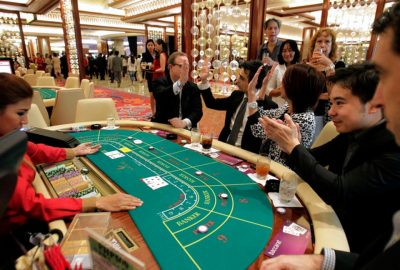 This Tuesday saw the official start of the long-anticipated International Casino Exhibition (ICE) which goes by the name of ICE Totally Gaming 2018 and as it was planned it brought many insights in the gaming industry to its participants. One of the valuable pieces which were given out as an advice to a budding gambling industry was directed towards the Japanese casino field, which is currently being widely discussed and regulated.

London welcomed a wide variety of companies and officials from all corners of the world, willing to take part of the annual convention and to share their thoughts with like-minded people. The exhibition was also designed in a way that would give many iGaming companies the chance to promote their newest projects and network with people who could also do a great part in them. Amid this atmosphere of development and flowing creativeness one Executive Vice President made public his opinion regarding the development of the Eastern industry.

Ed Bowers is one of the leading figures in MGM Resorts International and he deemed it appropriate to vocalize his position during a panel in the schedule of the exhibition. He claimed that the Japanese government should not focus too much of its efforts into protecting the gambling players, as this move could rob the industry of many opportunities for development in the future. Bowers stated that if the authorities put most of their efforts into protection, the economic growth objectives when it comes to gambling liberalization might experience a negative hit.

The application of too many restrictions or too strict regulations for the players could backfire, rendering the field somewhat crippled. Bowers gave an example including high taxes rates or higher entry fees in gambling venues. These moves might be originally intended to protect the players and put to rest the concerns for problem gambling and gambling addiction spreading through the nation. In the meantime, however, they can affect the young industry in a negative way and have an overall counter-productive effect on it.

What the Future Holds for Gambling in Japan It is not a secret to anyone that Japan’s government is looking forward to the introduction of integrated resorts, as this is expected to improve the overall economic situation of the country and find a way to attract more tourists to the location. This coveted goal has a lot of potential in the long run.

The fact that it is so closely located to large gambling hubs in the region such as Macau guarantees good conditions for the development of the future field, but the first step would be to provide the proper regulation which to keep all worries of the nation at bay. A known fact is that the people in Japan are not extremely keen on seeing the industry come to fruition, which is why measures are being taken at the moment.

December 2016 saw the passing of two casino legislations in Japan, thus beginning the process of construction. Lawmakers then decided to complete the move in 2017 with the final touches on the Integrated Resort Implementation Bill, but in the following months, it became known that the Diet will instead work on a gambling addiction legislation first since it is aiming to protect the rights of the players. The said bill is expected to be given the green light sometime this year, but in the meantime, some experts claim that the first casino resort in Japan could welcome its guests in 2024.