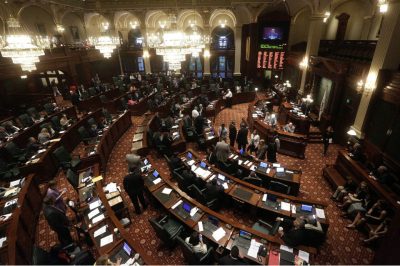 Two proposals for removing the restrictions on the online gambling industry in Illinois seem to fade away on the horizon of the soon-to-end legislative session, meeting again the perspective to be in the position of the bottom dog in the agenda of the lawmakers.

From the beginning of 2017, many states in America are on the fence when it comes to the online gambling regulations. Illinois is not an exception, taking into account that the state started to discuss the issue recently. The legislative session is the perfect moment for the suggested amendments to be thrown once again on the table for discussion.

The statehouse will need to consider not one, but two online gambling bills. The first one, which is now in the Senate, suggests the invalidating of the restrictions on the online gambling. The future of the amendment is still questionable, considered by many that it will be dismissed. In a nutshell, the bill suggests $10 million fee for obtaining a license to offer legal online gambling activities and 15% tax on gross gaming revenue. Compared to the figures accepted by Pennsylvania, Illinois suggests even less tax rate.

The second filed bill is very similar to the first one, but it is already in the House, waiting for approval. This means that it is one step ahead than the aforementioned bill. However, interesting enough is the fact that both bills place also the question of daily fantasy sports (DFS).

In fact, the efforts for breaking the chains of DFS started more than 2 years ago, but still, the lawmakers cannot find the intersection point between the different opinions and come up with an unanimous solution. Up to now, Illinois is said to witness the highest stakes for DFS, since the state attorney general views it as similar to gambling and thus, illegal.

Consequently, a third bill, which focuses only on DFS, emerged on the surface. Hopes are placed that at least the amendment considering the DFS will be added to the law, bearing in mind that the issue has been on the table longer than the online gambling.

In fact, the suggested online gambling amendments did not come out of the blue to the local government. Illinois mixed up with the online gambling issue before, when the topic was only touched, without being actually discussed. But due to the lack of time, it is expected that the lawmakers will not be able to come up with a reasonable solution.

But despite the poor chance for the amendments to pass, it is not a lost cause. Proponents of the bill explain that since the state is one of the few, which allows online lottery, there is also light in the tunnel for the online gambling and DFS.

Specialists explain that legalization of the online gambling and DFS will definitely reflect on the economy in a positive way. They point out New Jersey as a vivid example, which managed to stabilize its economy since the state has invalidated the restrictions on iGaming. It is expected that Illinois will follow the steps of its predecessor if it implements the amendments to its legal framework.