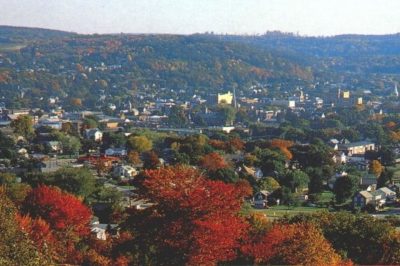 The bidding for the next locations for building mini-casinos is in progress and it was recently confirmed that one of the counties in Pennsylvania is making an attempt to attract the attention of the lawmakers. Several entities based in Clearfield County are trying to promote the region as one of the suitable counties where a new mini-casino could be built and it could operate with great success.

The proposed location for the construction of the gambling venue is situated in proximity to I-80 and according to the estimations of experts in the field, more than 30,000 people pass by it on a daily basis.

Combining their efforts in order to bring more revenue to the county and introduce a new hot spot for the region, Clearly Ahead Development, Visit Clearfield County, and Lawrence Township have decided to give a green light to their project which has the final objective to put Clearfield County on the gambling map of the US and to bring the next mini-casino. According to people well-acquainted with the specifics of the industry, this is going to bring a strong financial flow to the region and make it a more attractive place for people in the surroundings, as well as people passing by.

Advances of the Location The well-situated location which has been proposed is expected to provide an easy access to the future gambling facility and make it easily approachable by travelers and people who use the I-80 on a daily basis. The three entities have been contacting proposed casino developers which might be interested in developing their business at the Commerce Park in Lawrence Township. As Rob Swales, CEO of Clearly Ahead Development stated, this proposed location for developing the future casino venue has many beneficial features which are going to boost the operation.

Among them is the ease of access which is a considerable advance, as well as the commercialized exit with immediate hotel infrastructure that is expected to keep the customers coming back for more and staying longer on the premises of the location. The several accommodation offerings in the area are capable of providing rooms for as many as 1,600 people which is already a large number for the county.

As it has been stated in the regulation of the new mini-casino venues, they will receive gambling licenses as category 4 gambling establishments and this is going to give their operators the right to introduce up to 750 gambling machines and 40 gaming tables.

One of the conditions under which the said mini-casinos are going to be constructed is that they should not be located anywhere in a 25-mile range of an operating gambling facility. The first county to welcome a new mini-casino was York, which means that Mountainview Thoroughbred Racing Association is now looking around and trying to pick a suitable site for construction within a 15-mile area around Yoe. The borough is situated about five miles southeast of the city of York and it qualifies as suitable for the construction.

The second location which is going to see the construction of a mini-casino venue is a certain area of Derry Township, Westmoreland County. The operator which is going to oversee the management is the joint venture between Greenwood Gaming & Entertainment and The Cordish Cos., called Stadium Casino LLC. The operator is developing the multi-million Live! Hotel & Casino in South Philadelphia, which is set to officially open in 2020, and in the meantime it offered $40.1 million for the building of the new satellite casino facility.