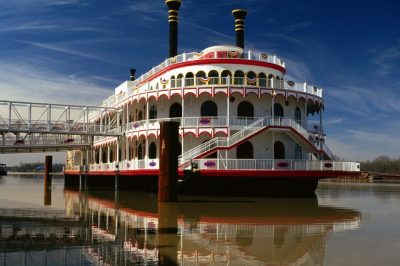 The Riverboat Economic Development and Gaming Task Force’s Chairman Ronnie Jones revealed a recommendation for the Louisiana Legislature at a meeting of the state’s Gaming Control Board.

At the meeting of the local gambling industry regulatory body yesterday, Mr. Jones insisted that the local legislators should allow riverboats to offer land-based slot machines up to 1,200 feet from the shore. According to the gaming task force’s head, such a permission would bring additional revenue to the state and would make Louisiana gambling market more competitive to the Mississippi casino industry.

Ronnie Jones, who is also Chairman of the Gaming Control Board, further revealed that the Riverboat Economic Development and Gaming Task Force had finalised its work and the Louisiana’s gambling regulator would not be taking any sides on the proposed legislation changes as it is supposed to be neutral.

The state of Mississippi has already given the green light to riverboats to offer gaming services on up to 800 feet of the coast. The Louisiana’s task force, however, is aimed to stretch that distance to 1,200 feet which would provide the existing 15 riverboat casinos in the state to expand the number of gaming tables and slot machines to their offering on land and offer more of them in comparison to their Mississippi rivals.

The 15 riverboat licenses which are currently available across the state of Louisiana are distributed into four main markets, including Baton Rouge, Shreveport/Bossier City, New Orleans and Lake Charles. For the time being, the local gabling industry contributes the fourth-largest stake on the Louisiana’s budget, with between $3 and $4 billion generated in tax revenue on an annual basis. The afore-mentioned measure proposed by the Gaming Task Force, is aimed at helping the state deal with the $1-billion budget deficit. As previously reported by CasinoGamesPro, the local Riverboat Economic Development and Gaming Task Force has been considering to bring some changes to riverboat casinos operation. However, in order for the amendments to be made, some of the gambling laws of the state need to first be changed by local lawmakers.

There has not been much development in riverboats regulation over the last few years. This has caused some controversy, especially considering the fact that the operating ones offer gambling services while docked which they are not allowed to do. In addition, certain riverboat operators have been thinking about moving their business to land as they believe land-based gambling would provide them with larger venues, which would bring them more profit, respectively.

The amendments to the existing gambling laws of the state which have been backed by the Gaming Task Force include some special requirements that riverboat licensees would have to comply with. For example, each riverboat operator would have to present the Louisiana Gaming Control Board with a development plan before adding slot machines to their offering on land.

For the time being, casino profits generated by local riverboat operators are imposed a 21% tax by the state’s gambling regulator. In comparison, such licensees are forced to pay a tax rate of 8% on their casino revenue.