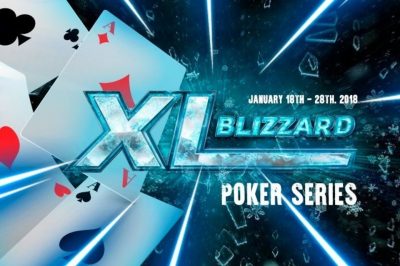 Poker enthusiasts from all over the world should be more than excited about the brand new online poker festival which commenced officially yesterday. It goes by the name of XL Blizzard and is hosted by the poker platform 888poker which promises a riveting experience for everyone. This Thursday saw the big start of the poker festival which launched its first event called $80,000 Opening Event followed by two smaller events bearing the names $15,000 Mini Opening Event and $20,000 Late Opening Event.

The inaugural event which paved the way for all other poker tournaments in the rich schedule of the online festival featured a buy-in amounting to some $109, which is one of the relatively low entrance fees in the festival. As for the two subsequent events, players who wanted to participate in them had to pay $12 for the Mini Opening one and $55 for the Late Opening Event which began a couple of hours later. At the very beginning of action in the Opening Event, there were a total of 667 players ready to get their hands on the first place prize as well as 279 re-buys. This made for some 946 players preparing for the run.

As a result, the total prize pool ended up amounting to $94,600and sufficiently exceeding the previously announced guaranteed prize pool amounting to $80,000. This, in turn, secured a sweet payday for the big winner in the poker tournament, as the first place on the leader board received some $17,736 for the excellent performance. For the first four hours of play, all participants were eager to reach the money bubble and make it to the money. The last player who left the race empty-handed was “BtM4Ever” from Argentina. Once the money bubble burst all participants were in for the big prizes and this resulted in about ten hours of riveting play and merciless eliminations. The 62nd place on the official leader board was reserved for Chris “888Moorman” Moorman and he received a total of $302.72 for his performance. In the progress of the next ten hours, almost all participants had to leave the run and this brought it down to the surviving nine players on the final table. The first one among them to go home was Mexican player “dr1zo” who received a total of $1,334 for their participation.

The eight position on the leader board was occupied by Ukrainian “974kWRT” who was granted some $2,129. Another player who had to leave so close to the big cash was “gnassil” from Sweden, receiving $3,075. Next up Russian poker player “M9yM9so” made it to the sixth place and for this bagged $4,021, whereas “ilginho” from Germany reached one step closer to the throne and was granted a total of $4,967. The player who came closest to the top three was “John_Doe09” from Malta, finishing at the fourth position and cashing as much as $7,095. As for the final three players surviving, all of them made the big money.

Canadian player “BTIPPPPP” received $9,460 for his performance, meaning that the two players for a heads-up duel were both Europeans. Irish player “123magmag123” opted for an all in with his last five million chips, but he ended up as a runner-up and received $12,771. The big winner of the night and the first champion in the online poker festival was “Graftekkel” from the Netherlands who bagged the generous first-place award amounting to $17,738.