Ask any skilled poker player out there and they are guaranteed to tell you poker is a relatively easy game to learn rules-wise, but mastering it may require a lifetime. Unlike the majority of casino games, poker is not based on chance but calls for players acquiring a set of skills in order to prevail over their opponents. Some of the basic skills required include reading your opponents, ability to maintain concentration for prolonged periods of time, a proper understanding of mathematical probability, and ability to control one’s emotions.

Above all, mastering the game takes Patience, Practice and Perseverance which are the three P’s of becoming a successful poker player. If you are new to this fascinating game of skill, going through the few basic tips we have outlined below poses as a good way to start your poker training.

Never Underestimate the Power of Observation 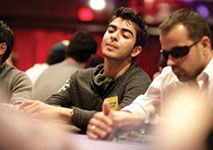 The main idea in poker is to try and gain as much information from your opponents without actually giving away any in return. One way to achieve this is to keep a close track of the reactions of fellow players and observe how they behave in given situations. Observing closely how each of your opponents plays different pots will enable you to pick some important tells as to their style of play. What you need to watch for are gestures and facial expressions your opponents demonstrate throughout the course of the game that may prove to be useful.

One such tell is the so-called “slanting” whenever a fellow player leans forward on the pre-flop after checking the hole cards they have been dealt. This leaning forward may indicate the player is satisfied with their starting hand and are prepping up for action on the flop, in which case it might be best for you to fold unless you are in possession of a hand you consider exceptionally strong. Watching your opponent’s eyes is of equal importance. If the eyes of a fellow player dart to their chips immediately after the flop hits, this might mean they are preparing for action because the flop has greatly improved their hand. 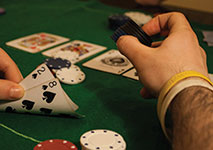 Bluffing is what many poker players resort to, usually whenever they have assessed their hand is not good enough. While bluffing is indeed an essential part of poker, overdoing it is by no means a suitable course of action. If you are bluffing just for the sake of it, you risk becoming way too predictable in the eyes of your opponents which sooner or later would render your bluffs ineffective.

It is important to remember that the main purpose of bluffing is to trick your opponent into folding and this is unlikely to happen if they are holding a hand they consider superior, regardless of how hard you try to intimidate them. The purpose of any good poker player is to diversify their style as much as possible and act less conventionally so that their opponents are unable to pick any tells from them. Predictability is precisely what would render you exploitable and thus, an easy target for your opponents. 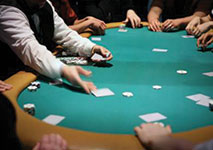 Table position is another factor that needs consideration and by that, we do not mean taking the seat that is the closest to the restroom. In cash games and tournaments, two of the players are required to “feed” the pot by contributing with forced bets, called the small and the big blind. These two are positioned to the left of the player that assumes the role of a “button”. The positions of the button, the small and the big blind rotate clockwise after every hand is played.

This is important because the button is the player who gets to act last during the current betting round which needless to say, gives them a considerable tactical advantage over their fellow players. The opponents have already acted in turn, which provides the button with a good amount of information.

In addition, players that are in early position, i.e. close to the blinds, have no way of knowing how large the pot will become towards the end of the current betting round and how many of their opponents would compete for it. Because of this, it is generally recommended to play a greater number of hands whenever you are in late position as this would enable you to make better informed decisions on each betting round. 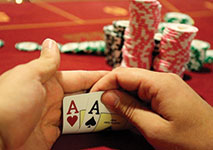 There is not much point in fighting a losing battle which is to say players should always carefully select which starting hands to play and which ones to skip on. If you consider you have been dealt a starting hand that is not nearly good enough, sometimes it is better to fold the hand altogether instead of pushing it and pouring more money into the pot.

Of course, poker novices would experience difficulties in evaluating how good their starting hand is, which is natural in the beginning. The good news is there are starting-hand charts that players can use as a reference point, especially when participating in online poker tournaments. Note that such charts should be used mainly as points of reference and are by no means applicable to all situations. In poker, similarly to other card games, there are way too many variables. Once you have gained a proper understanding of the game, you may proceed to gradually deviate from the chart.

Do Not Overvalue Suited Cards 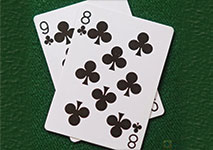 One of the most widespread mistakes poker novices make is to overestimate the value of suited cards which may potentially enable the player to complete one of the strongest hands in the game, the flush. However, because they are one of the highest ranking hands in poker, flushes do not occur all that often. In fact, the probability of forming a flush is way below 1% which is far from impressive.

If you intend to invest a substantial amount in the pot simply because you have been dealt a starting hand of two suited cards of lower rank, you better reconsider this decision. Even if the flush eventually comes, there is a possibility of a higher flush beating yours. Remember that obtaining cards of the same suit will provide you with a marginal improvement of your hand of less than 2% only, which is not enough to justify calling other players’ raises on the pre-flop. As was mentioned earlier, sometimes the best course of action is to fold a hand, even more so, if it consists of suited cards of a lesser rank.

Select the Games You Play Depending on Your Skill Level 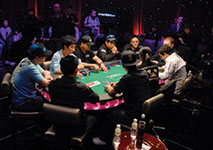 One of the biggest advantages of playing poker online is that you get to choose from an extensive range of variations and betting limits. Some tables are suitable for high-rollers, others are designed for less experienced players who are still in the process of mastering the game. Until then, however, players are recommended to stick to the tables with betting limits that correspond to their level of skill and bankroll size. If you start at a $2/$4 table, you can expect to compete against players that are at your own level of skill and experience.

However, do not make the mistake to “hop over” to a table with higher limits like $5/$10, for instance, even if you have happened to win a good stack in the lower-limit games. One important thing to remember is that with higher limits comes higher variance and you will suffer swings more frequently. If you wonder why is that, the explanation is actually rather simple. The players who contend for the pot at the higher-limit tables are more experienced and therefore, boast a much higher level of skill. It takes time, practice and plenty of discipline to get there.

Try Not to Tilt on Losing Hands

And the last tip is probably one of the most important pieces of advice we can possibly give you. In poker, it is essential for players to remain in control of their emotions at all times. If you fail to do that and your opponents notice it, there is a good chance they will try to exploit this and use it against you. Losing a hand or two is actually part of the game and is unavoidable. How you cope with it is what matters.

When players get angry and frustrated, they are said to “go on tilt”. This clouds their judgement and prevents them from playing at their best because it affects their decision making. Poor decision making, on the other hand, is equal to incurring losses. If you think about it, this applies to almost all aspects of life and playing poker is hardly an exception. Whenever you feel frustration starts getting the best of you, it would be better to quit the game for the moment until you become a master of your emotions once again.