Poker, similarly to other classic casino games, requires players to stick to certain rules of conduct while at the table. Unlike games of chance like craps and roulette, however, poker is a mind game as players need to carefully read their opponents and gain as much information from them as possible.

Prior to joining a poker game, one needs to first ask themselves the question “Am I a good sportsman?”. If the answer is “no”, one such person should re-evaluate their behavior and start adhering to some general rules of conduct that would enable them to maintain proper etiquette. At least, if they wish to avoid coming across as a dolt and a bad sport. After all, poker is a competitive game one plays with a group of people so it would be a good idea to try and end it all on amicable terms with fellow players.

One of the basic rules of conduct poker players are advised to follow is to always be polite with their opponents. Mutual respect should always be at hand (excuse the pun) at a poker table. It is possible to play more aggressively and bluff your opponents subtly while maintaining good etiquette at the same time. Those who resort to derision, verbal abuse and intimidation do not stand well with fellow players and are unlikely to be invited back to the table they were playing at. 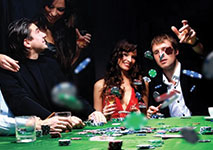 Showing modesty when you win is considered another aspect of good table etiquette when it comes to poker. It goes without saying there, is hardly a person on planet Earth who enjoys losing a hand and saying “goodbye” to a nice pot. If you emerge a winner, do your best to contain your satisfaction and consider how you would feel if you were on the receiving end of things and had lost.

What is more, in such situations, it is generally considered in poor taste to force fellow players to expose the hands they have folded, even more so if they appear reluctant to do it. On that note, it should be mentioned players who have folded should steer clear of openly discussing their hole cards with fellow competitors while the latter are still in hand. 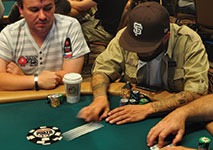 The rule from above is actually applicable when it comes to containing your reactions to the board after you yourself have mucked your cards. This is so because your telltale reactions may provide the players who are still in hand with additional information, allowing them to manipulate the outcome in their favor.

There is a knack to everything and folding one’s hand is not an exception. When folding, players should muck their cards carefully in the tray with discards in order to avoid one or both cards landing face-up. If the players who are still in hand get a glimpse of the cards you muck, this would provide them with an unfair advantage. 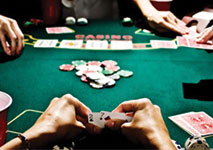 Slow-rolls are considered one of the most frowned upon things you can possibly do at a poker table and are treated as signs of a very poor taste. While there is no particular rule that prohibits this move, it should be avoided because it adds unnecessary drama to the game and is offensive to fellow players.

The term is used whenever a player, who believes they have the best hand at the table or the “nuts”, deliberately delays exposing their hole cards during showdown, or does so at a very slow pace, in order to upset players holding less favorable hands. The right (and less offensive) way to expose your cards during showdown is to immediately flip them over.

Always Wait Your Turn and Protect Your Hand 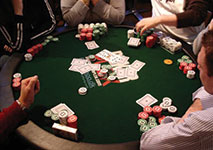 Acting in turn is another sign of maintaining proper etiquette at the poker table. Players are recommended to avoid reaching for their chips or mucking their cards before it is their turn to act. One should always wait for their turn to come and then announce they wish to check, bet, call, fold or raise.

It is all players’ responsibility to protect their hole cards as best as they possibly can. When you are dealt your two hole cards, you are never supposed to pick them up or remove them from the table. The cards should remain face-down. Good form dictates you should cover the two cards with one hand and slightly turn up their corners with the other. What is more, it would be best to take a peek at your hole cards only once and avoid looking at them repeatedly. 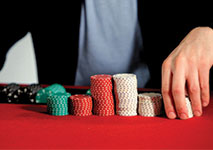 Another key aspect of good etiquette in poker is to keep your stack of chips well organized, which would result in several benefits for you and your fellow players. First of all, this would render it easier for you to make your bets, especially if you have organized your chips in several columns, depending on their values. Also, if you decide to move all in and have organized your chips in advance, it would be easier for your dealer to evaluate how much money you are adding to the pot.

Besides, organizing your chips would be fair to your opponents because they will know exactly how much money your stack consists of. The chips of the largest value should be positioned on the outside of your stack to prevent the dealer and your opponents from wrongly assuming you are the player with the shortest stack at the table.

Speaking of chips, when betting, calling or raising, players should by no means scatter the entire pot by recklessly tossing their chips in the middle of the table. This is more than likely to result in a total confusion for everyone, you included, since the chips might get mixed up and there will be no way for the dealer to tell which chips belong to whom. Also, it would be impossible to know how much you have actually contributed to the pot.

Do Not Leave the Table for Prolonged Periods of Time 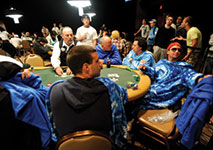 Every once in a while, players need to take a break in order to visit the restroom or make a phone call. While they are indeed allowed to leave the table, it must be noted that proper etiquette dictates one should avoid being absent for prolonged periods of time as this would render the table short-handed since there will be one less person to contribute to the pot.

One thing to remember is that the purpose of maintaining proper table etiquette is to allow the game to run as smoothly as possible. Failing to comply with good form has a negative effect on the game and would neither help the player breaching the etiquette, nor his opponents.