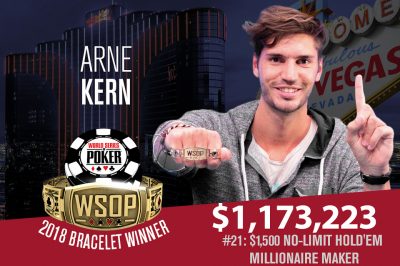 Las Vegas is the place to be for every poker player at the moment since the World Series of Poker is already in full swing and poker action has reached the 30th tournament in the rich schedule of the festival. The latest winner of a WSOP gold bracelet is no other than German poker player Arne Kern who managed to emerge victorious from the Final Table of Event #21: $1,500 No-Limit Hold’em MILLIONAIRE MAKER which granted him some $1,173,223.

This event is one of the emblematic tournaments in the well-rounded schedule of the WSOP since it provides all registered participants with the real chance to become the newest millionaires in the poker world or increase their total live earnings with an additional million. The 49th edition of this worldwide-known witnessed a total of 7,361 players registering for participation in this event proving the initial prognoses that this would be one of the most popular tournaments this year.

Given the fact that this event provides players with some of the most generous payouts, this comes as no surprise. Even though the initial plan for the event was to continue over the span of five days, sometimes things do not go as planned and instead, the Final Table took place on the fourth one this Wednesday.

The final stages of Day 3 were the right time for many players to be sifted out from Event #21 and this is how players were reduced to only 16 after the final hand for the day. 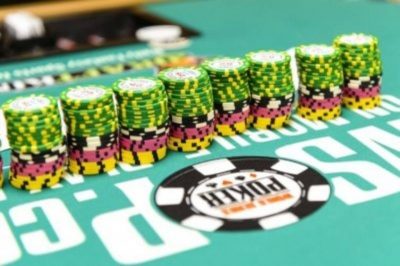 The chip leader who welcomed back players for the last day of action was Chad Hahn from Westfield, Indiana who succeeded in claiming a total of 6,525,000 in chips. The first player to be sent to the rails was the high roller coming straight from Germany Manig Loeser who received a total of $51,188 for his deep run in the poker event.

From then on out elimination continued with full throttle as more and more people were sent home and the player field was slowly reduced to the most skillful ones only. Among them were players such as Joe McKeehen who made it all the way to the first place at the 2015 Main Event which secured him a sweet payday of $7,683,346.

Justin Liberto is also another player who turned 2015 into one of the memorable ones as he claimed the throne at the end Event #51: $3,000 No-Limit Hold’em Six-Handed which resulted in a paycheck amounting to $640,711. In this poker tournament, the former made it all the way to the third place on the official leader board for $538,276, whereas the latter claimed the fifth position and $303,294.

The eventual winner was situated at the very bottom of the rank list with an unimpressive chip stack which did not foreshadow what was about to take place, Kern himself said that he was anticipating the right time to shine at the final table. The heads-up duel brought both players participating in it their largest live earnings up this point. Kern and Sam Razavi outplayed most of the field and their excellent performance led them to the final duel which determined the eventual winner.

Kern himself accomplished becoming the next millionaire as well as the WSOP gold bracelet winner with this first place. Since Razavi was unable to defeat the skillful winner he had to settle for the consolation prize of $724,756, which is still a generous payout when compared to other events in the festival. From here on out WSOP progresses ahead with even more tournaments as we approach the Main Event.